A group of North Ayrshire residents were met outside Parliament by Green MSP Ross Greer on Wednesday. The residents, from Fairlie Community Council, were in Edinburgh as part of a rally organised by the Planning Democracy campaign group, in support of the Equal Right of Appeal principle.

Equal Right of Appeal means an end to the current planning rules that allows developers the right to appeal should their planning application be rejected, but doesn’t allow the local community a right to appeal against planning permission being granted. 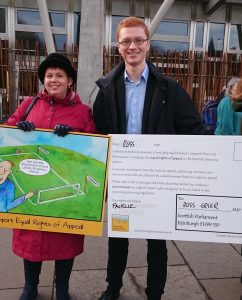 Ross Greer, Green MSP for the West of Scotland, commented:

“I’d like to thank everyone who came to speak to MSPs, and it was great to see those who had made the trip from Fairlie. I fully support Planning Democracy’s campaign and hope they’ll have the support of Parliament. The current planning system is unbalanced and undemocratic- the developer’s exclusive right of appeal gives them an unfair advantage over communities like in Fairlie. This causes frustration to people all around the West of Scotland.”