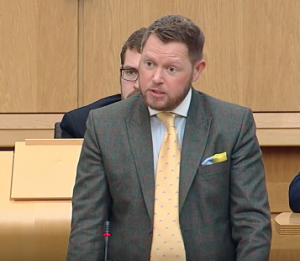 Jamie Greene MSP has just asked the First Minister in FMQs, why he has not received responses from the Environment, Climate Change & Land Reform Cabinet Secretary Roseanna Cunningham MSP on two important letters relating to the Hunterston Site.

More than a month later he has not received a response for either.

Kenneth Gibson MSP looked on with a consternated expression as Nicola Sturgeon MSP  joked that she hoped her ministers will not be clocking off early for Christmas. As the First Minister is not aware of the details in Jamies Greene’s letters, she cannot comment until checks the position with the ministers concerned. She will ensure that replies ‘wing their way’ to Jamie Greene and on his desk in the early part of the new year.

You can watch Jamie Greene asks his question at 24:52 seconds on the clip below: